One of the notable things I’ve noticed about a coming New Year are projections and hopes for the future. There is a space for looking forward, it seems often for me that looking backward in taking an historical or retrospective view is something I do far too often, and I don’t look forward enough. There have been lots of articles that I’ve read lately about what people think are economic, political and cultural projection. I enjoy seeing forward perspectives on films and musical acts and games  to look forward to over the next year, as well as what they think are going to be big hits and often finding retrospectively, when they are desperately mistaken in naming ‘the next big thing’. Even in the the comics world the New Year is planned out as a series of new beginnings for well-known characters.

I haven’t spent much time thinking about New Years Resolutions, partly due to two reasons: firstly I’ve been quite busy enough getting on with goals that I’ve immediately set for myself and secondly, I think that I made some pretty systematic ones last year. In this post I will talk about my 2012 resolutions, and in writing about it I will consciously consider in the background of physically typing this, whether I need to amend my targets.

So, last year I set some resolutions of varying priorities. Some things are low priority, such as trying to read 120 books (a challenge I set on Goodreads.com). I failed at this. In 2011 I managed to exceed my initial target of 100. I thought if I set 100 I would easily beat it. I was wrong. I still have on my computer playlists of audiobooks and ebooks that still need reading. I estimate that I have between 285-310 (not including ebooks) that I have planned to read over the course of my lifetime. Some books will take longer than others (like Decline and Fall of the Roman Empire!).

The higher priority resolutions I have taken a systematic, and routinised approach to (or if one is a Kantian, a Schema). I have written a document which states my goals and targets, and I’ve set in google calendar to have a weekly review of how I have achieved these targets. I think that this year I will have a weekly and monthly review of said tasks. So my resolutions were (and I quote from my official target plan:

A review of targets

In setting these New Years Resolutions I learned a lot about myself. Can you guess which of these targets were the most difficult? I’ll let you wait. In the meantime here is a related memebase picture. 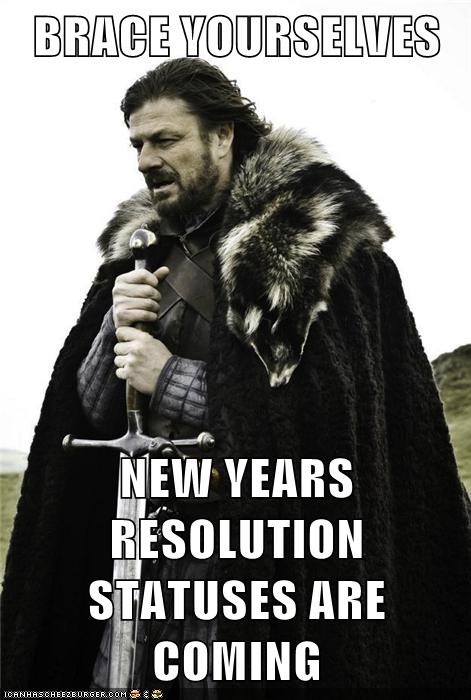 I found that each of those targets had a challenge, and presented different challenges for me. The one pertaining to keeping active and applying to lots of jobs are about the very important skill of grafting (and for me that concept will forever be associated with Mo Farah). Grafting is what my piano teacher always taught to me. Practice, practice, practice. If you are dying, practice. If you are busy, practice. If you have other things to do, practice. That is the essence of being a musician. My Jazz musician of a teacher’s favourite phrase was ‘there is no excuse but death’. Sage advice from a man that was a centenarian. Keep active to keep fit, and keep working on those applications to get a lead (eventually). I must admit its not easy and giving up can be tempting. I’ve learned to change a bit of my attitude to graft more and in doing so I have discovered more about myself through making a new person out of these activities.

The third task is about something completely contrasting to the aforementioned resolutions. I am someone who as a response to my dispositions, has relied on rituals and routine to try and get out of a slump and be productive. However the extreme of this is that I can sometimes be obsessed with routine to the point of being overwhelmed by tasks or being incapable of dealing with sudden changes and spontaneity. So my response to this is a minimum of one occasion a month going to a completely new situation, whether this is a new physical place or doing something new or approaching a task that I’ve done before in a completely novel way. I’m trying to work on my plasticity through subverting routine on occasion. I said it’s a minimum of once a month, but in practice I managed to exceed this.

The other two are more personal. I really want to keep up my musicianship. I performed in front of an audience last year and some friends of mine are desperately trying to get me involved in an ensemble situation. I also started to learn the ocarina with a view to learning other musical instruments. I picked up my first saxophone yesterday and I was amazed at its similarity to the clarinet. I think I may have begun a new love affair with music.

Most of my targets I met, some of them I exceeded, some of them I failed. Sometimes this is a matter of setting expectations too high, other times it can be about unforeseen events getting in the way. I need to have a bit of a think about what my resolutions should be for this coming year, but I do quite like what I set for myself last year. I might tweak it a bit rather than making a completely new set of targets.

New Years Resolutions are a cultural phenomenon, they may have religious origins but I do think it is a genuinely secular effort at self-improvement. There is a sincerity to New Years resolutions towards a commitment to self-betterment, whether that’s of a person’s outlook or wellbeing, or an external situation that relates to them such as improving a community or relationships. Looking through the Wikipedia page it looks like there’s data that the idea of the resolution is something taken up by many people, but not so much that they follow up on. A general lesson in life is that good intentions can come from a sincere place and its great to acknowledge avenues of improvement. It’s completely another thing when it’s the middle of the year on a weekday that is particularly busy or stressful and many other things need attention. On may be is tempted to oppose the intention of what their resolution was, or completely forget about it.

My intention of the day is bundled with an half dozen other things. There are many elements to keeping a resolution from my experience, and I’m certain there are many other things I’ve yet to realise are challenging.

You can leave a reply or comment here Cancel reply