I think its fair to say that its official. It’s only been a few rehearsals so far, but I am part of a group of musicians who are performing together. We are a group of about 4-6 friends (depending on who is available/venue/available instruments) and between us is a lot of friendship, love and passion for performing.

I think it becomes official that we are a committed group when my friend who hates playing the Cello announces to great shock: I think its time to bring this along to our playing sessions. I have been rediscovering my musicianship over the past couple of years, by regularly practicing piano again and performing last year to an audience. Rediscovering involves an inward reflection of finding what it was in my past that made me a musician and re-learning what I used to know.

Lately I have gone beyond rediscovery and I am going into new and uncharted territories. I have experience playing as a piano soloist, but I am now going into accompanist mode. I’ve been playing accompanist lately for a singer, a trumpeter and a saxophonist. I’ve attempted to go through a piano duet (Faure’s Bercuse from Dolly Suite) and I am exploring some pieces that I’d love to play in an ensemble context. However it seems that I have a lot of emphasis on Gabriel Faure’s repetoire. There is an odd thing that the music I listen to is vastly different to the music I perform, and the classical music that I tend to lean to is vastly different to the music I want to play.

As a performer I am strongly leaning to the Romantic and to a much lesser degree the classical and baroque period. However if I were to talk intellectually about music my interests lay in composers like Bach and Schoenberg. I arrogantly said this week that ‘Beethoven may be a brilliant composer but Bach is a genius’. There is an odd tension between my performing life and my intellectual and aesthete sensibilities. On the way to the rehearsal I had a lot of heavy metal playing on my mp3 player. I play a lot of indie and other various genres on my monthyl playlists and I am very wide about trying to find music that I want to discover and listen to, but when it comes to musicianship as a form of self expression – things like black metal, heavy metal or Schoenberg go to the wayside in favour of Debussy, Faure and ballad like pieces. I’m a contradiction: Romantic at heart, but modernist at mind.

I think there should be more to be said for this strange contradiction. I may explore my musical sensibilities in future posts, especially as my involvement as a musician has expanded greatly recently. What a joyous thing it is to be able to perform with friends! I’m also going to try and break out my clarinet in the next couple of months… 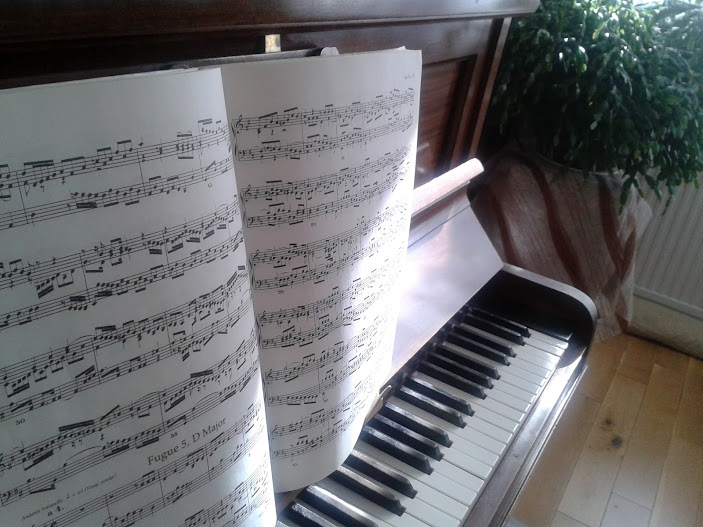 On Returning to the Piano

At the start of the year I made a resolution to keep to specific targets, call this my way of being honest about improving myself with a view to keeping a new years resolution. I resolve to 7 separate targets which I measure on a weekly and monthly basis to determine if I have upheld them. I’ve found that on the whole, I’ve been attending to most of them, although some weeks I do more of one task than the minimum requirement and less of others, due to the inevitable variance of everyday life, family and work commitments.

One such task that I set myself was to try and get back into music. This could be a vague thing from practicing piano to some other music related activity. I joined a choir late last year for example. I was then asked by my cousin in March to perform at her wedding reception. What an honour it was and I accepted hastily. I have a mixed relationship with performing, and in many ways performing is a metaphor for life, I find practicing piano a metaphor for life in other ways too when it comes to dull pedagogical issues of fingering in particular.

Back in the day I used to perform for ensemble and solo outings. I sang bass vocal part, played the  clarinet (mostly in ensemble) and I thought that my piano abilities were relatively speaking my stronger asset. I was kind of put off performing once I realised a physical peak to my abilities due to an issue I have with limited motor skills. I found that my mind could learn and memorise music that I was in fact, incapable of physically playing. This led to a certain frustration of sorts about my abilities and life in general. I felt a sense of injustice about it.

I hated performing, but I kept doing it. I wish I could explain what drove me in those days. In a way it seems to be my general mindset with many things in life, that I’m attracted to difficulties and challenges that can be painful, boring and adverse in other respects. When I was asked to play for my cousin’s wedding, I had to think of a repertory that was completely different to what I had before, and think of things to play that were suitable for the audience. When I performed solo I usually didn’t think about what others wanted to hear and felt that my performing was a brute form of self expression.

I rediscovered the joy of practicing piano again this year. I enjoyed having a goal to work towards and that worked as a very good incentive. I remembered the pressure and anxiety I felt just before I performed. I made a point of not drinking any alcohol or any heavy food just before my time to play in the wedding reception, and a testimony of my brother’s friend that he saw me finishing half a bottle of white about a minute before I was meant to play.

Playing again made me realise how much joy and creativity comes from performing. Playing again was a discovery of a part of me that I’ve been ignoring for so long. I found a new ability in learning to improvise and my aural listening skills have recently come into use when I was spontaneously jamming with a few friends of mine last week. For me, performing is a form of self-criticism, healing, laughter and an opportunity to bond with others. Performing and listening to music makes me understand the viewpoint of some of Schopenhauer and Nietzsche (the latter an amateur pianist and composer himself), my musical education has been a great influence on my outlook in life whether I perform or not and even to a large extent my philosophical views. I can’t believe I stopped playing for so long.